I don’t know if it’s because it’s halfway through the trip exactly, or because I ate something funky, or because I slept on a train the night before and a boat the night before that, but I wasn’t feeling super on the ball today. I wasn’t sick, but I guess run down is a better word for it. Not sure…nonetheless, it was really fun to get to explore Huê and learn about Vietnamese history.

We survived our second journey on a night train! Like I said yesterday this particular night train experience was much nicer than the last…mainly because we had our own bunk this time. 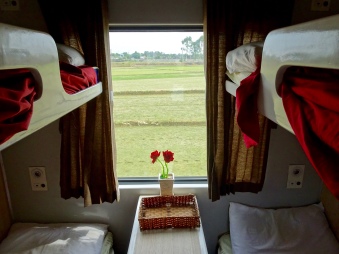 We made it to Huê and embarked on a daylong city tour. Because we only had one day in Huê, we needed to pack in as much today as we could! Our Vietnamese guide started off my taking us to the former Royal Palace. Vietnam hasn’t had an emperor since 1945, which is a topic I knew very little about. I won’t be able to give the full history, but I will say that I was very fascinated by Chinese influence in older Vietnamese history. Before coming to Vietnam, I must admit that most of what I’ve learned stemmed from the time surrounding the Vietnam War. I was really intrigued to learn about the royal family and how their roots have spread into modern society. 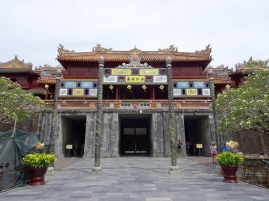 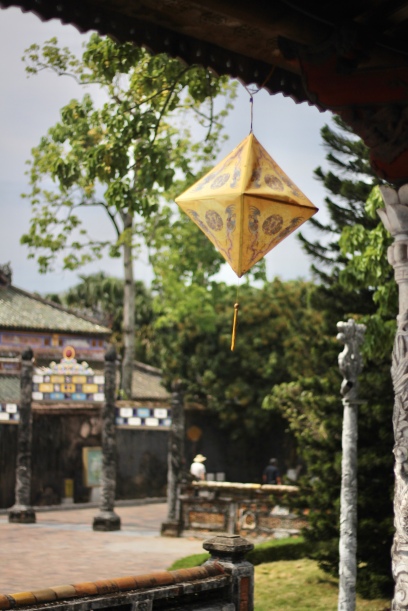 Anyone reading this who is very familiar with the Vietnam War will know Huê for its major battle – The Battle of Huê. This battle is remembered as the bloodiest battle during the war and therefore had a major impact on US public opinion pertaining to the war. It was very difficult to wrap my mind around the fact that you could still see bullet holes surrounding the imperial city’s walls. Most of them have been patched up, however. 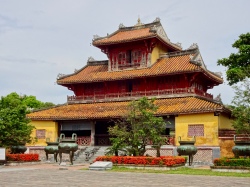 From there we took a short bus ride to Thien Mu Pagoda. This is an iconic symbol for the city. What was most intriguing to me was that the surrounding temple was where the monk practiced who burned himself alive in Saigon to protest the Vietnam War. If you haven’t heard this story, I’m sure you’ve seen the iconic photograph.

We concluded our tour by visiting The Tomb of the 9th King of Vietnam. The tomb was about a 15 minute drive outside of Huê, and then a short walk from the road. Again, everything was so ornate with intricate details. Definitely a grand place to be buried.

From there, we went back to the hotel and got ready to go to dinner. It was fun walking around the lively streets of Huê at night. We were definitely in a more touristy region, but it was so fun seeing all the night life. The main street was closed to street traffic and all the shops were open for foot traffic. We packed a ton in today, but I definitely felt like I learned so many new things about Vietnamese history.

RELIVE TODAY’S EVENTS WITH ME BY CHECKING OUT MY VLOG!