HANOI IS SO WILD…in the best way possible!! It’s unlike any city I’ve ever been to before, and you can’t help but jump in and try to (quite literally) go with the flow. First off, let me say that this day was BRUTALLY hot, and we were outside touring around Hanoi for a large majority of the day. We didn’t let that stop us from packing in as much as we could in our only full day in this amazing city. By the end of the day, we were able to see Ho Chi Minh’s Mausoleum, the “Hanoi Hilton,” try some local pho, drink Vietnamese egg coffee, and enjoy a traditional water puppet show! Overall, I very successful day.

As we learned yesterday, simply crossing the street in Hanoi is an adventure. So you better believe our 30 minute walk from the hotel to Ho Chi Minh’s Mausoleum was rambunctious. Our local guide told us we weren’t allowed to bring any water into the mausoleum, so we all reluctantly left without bringing anything to hydrate with. That was a mistake because we all agreed we could have chugged at least two full water bottles by the time we reached the mausoleum. 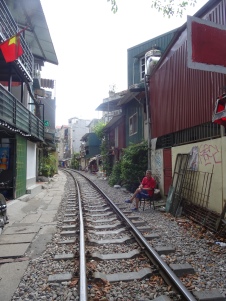 Nonetheless, we made it to Ho Chi Minh’s Mausoleum. We learned that many “Uncle Ho” supporters (as his fans very admirably call him) visit his mausoleum with the hope that he may one day reawaken. This thought was wild to me, but after seeing the body, I could entirely understand that belief…but more on that later.

DISCLAIMER: My number one priority while visiting Vietnam was to make sure that I made my best effort to leave my American-public-school-education-bias at the door. The Vietnam War definitely goes down in American history as being a controversial war, and for that reason, there are so many gaps in my education as far as what actually occurred during those years. For the entirety of my trip, I fought hard to see through both the American and Vietnamese propaganda that emerged during and after the war.

With that being said, I experienced my first identifiable culture shock of the trip while visiting the mausoleum. This trip is my first time visiting a communist nation – first Laos, now Vietnam, and soon Cambodia. It was already apparent, after my short time in Vietnam, how communism impacted everyday life both similarly and differently in Laos and Vietnam. However, the US has a very different relationship with Vietnam than it does with Laos, so where I had very little to no background information on Laos, I definitely carried with me some knowledge of US and Vietnamese foreign relations…but I digress. I could talk for hours about this topic, but I’d like to keep my focus of this blog about traveling and celebrating different cultures and traditions rather than turning this into one of my International Relation Essays. So in short, my biggest observation/take away is as follows (feel free to skip ahead to continue on with our day in Hanoi!):

Now that my Cinema/International Relations student side of me said what she needed to say, lets get back to the rest of our jam packed day in Hanoi. 🙂 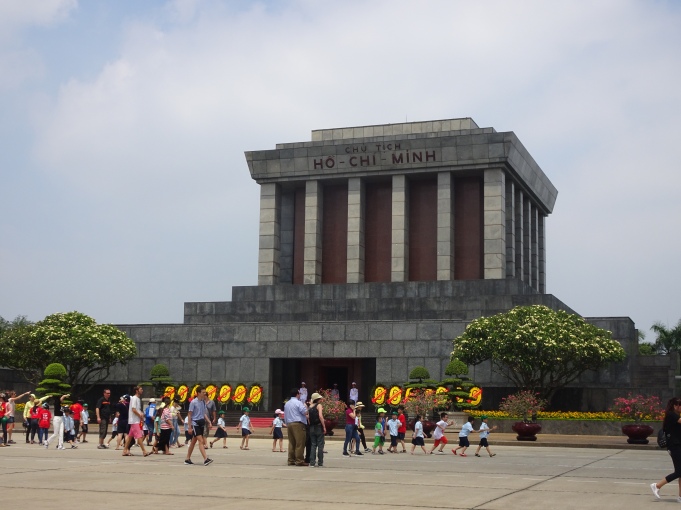 Seeing Ho Chi Minh’s preserved body definitely made me realize why people think he might be coming back to life. In the minute that we swiftly passed through the room with his body, I kept peering to see if he would blink or breathe or twitch. Nothing. The body was so life like though. I couldn’t believe it. We also continued to walk around the rest of the complex and saw the Presidential Palace, Ho Chi Minh’s house and cars, and even passed through a small temple. To be honest, we could have spent the entire day there if we wanted to! There was plenty to see and do and learn about. If you are planning a visit, I’d say a half a day is a solid amount of time.

We then took taxis to the other side of the city to Hoa Lo Prison Museum the site of the infamously nicknamed “Hanoi Hilton.” Now to avoid going on another long rant about my internal realizations, I’ll only touch on this shortly. Especially because, depending on who you ask, there are two very opposing stories as to what happened here. I’ll leave my personal opinions out and let you do your research. I’ll just spark your interest (hopefully).

The Hoa Lo Prison was originally a local prison, but it was then used by the French colonists to imprison the Vietnamese in the early 20th Century. The museum is mainly dedicated to that part of history and explaining Vietnam’s complicated relationship with France. I had no idea France colonized Vietnam and its something I was excited to learn more about. Additionally, there are a couple rooms dedicated to the time when the prison was nicknamed the “Hanoi Hilton” by American POWs in the Vietnam War (most famous being John McCain). Here’s where the two stories come into play. The American side of the story is that the US POWs sarcastically called the prison the “Hanoi Hilton” due to the deep inhumane treatment they received. The story the museum tells is that the Americans were treated so formidably that the POWs called it the “Hanoi Hilton” because they felt like they were on vacation their stay was so great. Both stories are polar opposite. I did a lot more research into it and came up with my own conclusions, but my sweeping realization is that there is and always will be two sides to every story, especially in history. It’s our jobs as global citizens to educate ourselves and come to our own conclusions to fill in the gaps that history may have left out.

So after that, we were pretty much all dehydrated and on the brink of heat stroke.  So our local guide took us to a cool local restaurant. I nearly passed out before we made it. And like any logical person would do in this heat, I ordered a giant bowl of steaming pho. I learned that pho is traditionally a breakfast dish…westerners have actually adapted it to be more of a dinner meal. #TheMoreYouKnow

We made it back to our hotel where I took a big ol’ nap. We still had our water puppet show to attend! Our CEO showed us this hidden gem cafe where we could all try egg coffee. OH MY GOODNESS was it good. Imagine the best coffee ever with a half an inch of delicious custard on top…and that’s essentially Vietnamese egg coffee described by a non-coffee drinker! LOL I’d highly recommend the cafe! Its called Hanoi Time Coffee and Food. You’ll go down a little entry way that looks like you’re going into someone’s house and then three flights of tiny stairs, so if you think you’re in the wrong place that means you are almost there. 😉

After the amazing coffee, we attended a traditional water puppet show by the lake. My iPhone photo doesn’t really do it justice, but the set is a giant pool with a curtain about three quarters of the way back. On either side of the pool/stage are live performers. The music drives the show and then the puppets perform traditional Vietnamese stories in the pool.

Dinner was so fun because it was at this swanky rooftop restaurant, yet bitter sweet because half our group was leaving us!! If you managed to read this far into today’s blog post, THANK YOU, but you may then somehow still have interest in today’s vlog…