Laos is easily one of the most beautiful countries I’ve ever visited – both for its nature and culture. We spent the day in and around Luang Prabang, but boy was it a long day!! We packed so much in!

I woke up at 4:30am to participate in offering food to the monks that process through the town every morning. It’s a tradition that only occurs in Luang Prabang. The locals drop one small ball of sticky rice into each monk’s bowl. I was amazed at how the monks would then drop some of their food for the local impoverished children, so that their children could bring the food back to their families for the day. It was truly a humbling experience. 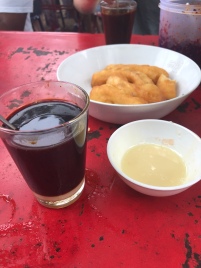 We then visited a local UXO Museum that shares the everyday horrors the Lao people are faced with due to the thousands of unexploded UXOs that were dropped on the country to restrict Vietnam from gaining supplies during the Vietnam War. I learned that Laos is the most heavily bombed nation in the world per capita. Every year, nearly three hundred people are killed from coming across these bombs and nearly hundreds more maimed or injured. I was absolutely appalled to hear about the minimal humanitarian efforts from the US following the war.

After this heavy experience, we then visited Ock Pop Tok to learn about traditional Lao textiles. We saw everything from the silk worms, to the different coloring processes for the dyes, as well as the women weaving the patterns on the loom.

Then after an hour drive, we were able to swim in the beautiful waters of Kuang Si Waterfall. The limestone rocks caused the water to turn this unbelievable shade of blue. After the giant main waterfall, which was actually made up of numerous tiny falls all running into one, there were tiny little ponds that would fall over into other tiny ponds. I’ve never seen another waterfall quite like it. It was quite a pleasant surprise to find that we didn’t need to do any real hiking to witness the glorious falls! I was ready for a full on hike!! If you plan on swimming at the waterfall, be prepared for the tiny fish that nibble your toes. They’re quite ticklish, but harmless! 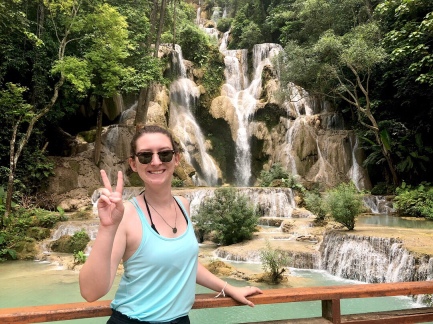 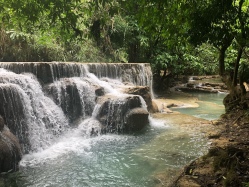 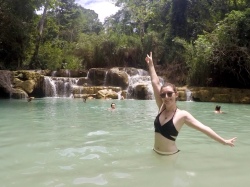 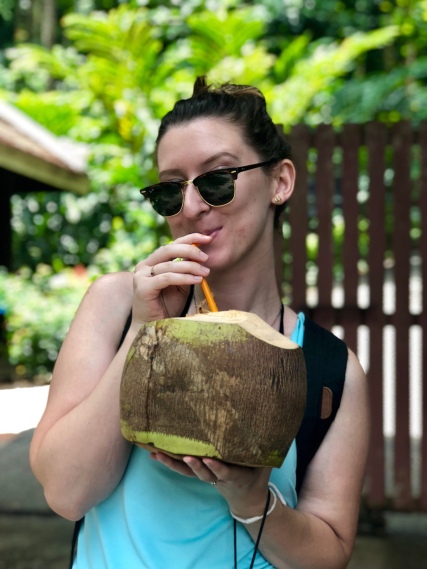 After making it back to the town, we got all cleaned up and ready for a traditional Lao meal cooked by a local family. We all sat on the floor in a big circle and were welcomed and blessed by the two eldest women. The food was delicious!!! We had fried chicken, a chicken salad of sorts, salad, fried eggplant, curry, bamboo, and river-weed (seaweed, but from the Mekong River). Then for dessert, we had mango and this really tasty coconut gelatin.

Overall, today was filled with experiences that made me truly appreciate Lao culture. Not only were we able to learn more about the country and partake in local traditions, but we also were able to witness the true natural beauty of Laos.

RELIVE TODAY’S EVENTS WITH ME BY CHECKING OUT MY VLOG!

Nara is more than just its famous deer park! There are so many gorgeous temples and shrines surrounding the deer park. Nigatsu-do was my favorite. Get ready for a few steps tho.
This was my favorite temple from the whole trip!! The funniest part is, so few people ventured up here in the heat. It also offers really spectacular views of Nara. If you zoom in, a lone deer made his way up here to find some shade.
I’d be lying to you if I said I knew what these said. If anyone knows, please enlighten me.
The key to getting photos in crowded/touristy areas in Japan is to nonverbally (or verbally) team up with another person taking photos. You both wait for each other to get your photos, and then let everyone else waiting pass until the steady stream of people slows down again for you to get another photo. Luckily heat has been keeping people away from popular sight seeing destinations! 🥵😅
Sake barrels stacked outside of Meiji-Jingu Temple
We got to walk through Omoide Yokocho (or nicknamed Piss Alley) on our last night in Tokyo! The sights, smells, and sounds are incredible! Seeing all the lanterns at night was definitely quite the site! 🏮